My original article, The Boucher Calculator in the Inaugural Issue of the Gazette in Autumn 2000 described a variety of these devices from a number of makers.  I have since found another fascinating example, probably the seminal device.

The Oxford Museum of the History of Science

Browsing through the illustrations of slide rules in their collection on the web (www.mhs.ox.ac.uk) I found an early Boucher made in France. This is extremely similar to the illustration of the Pocket-watch device, including signature, shown in UK Patent 4310/1876, Figure 1 in my article.  Two of the three pictures are shown below, the third shows the calculator in its box.  The high quality device, illustrated below with its accompanying notes, is somewhat different to all the other Boucher devices from the other manufacturers.  Incidentally, the Le Havre address is the same as that quoted in the early Calculigraphe instruction book, showing a very close relationship between Boucher and the Calculigraphe.  There are no indications on this device as to manufacturer or date it was made. 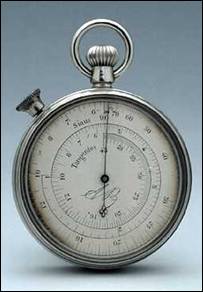 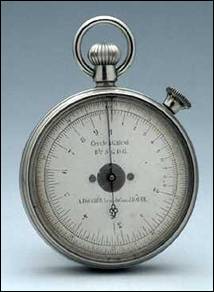 Inscribed "Cercle à Calcul / Bté S.G.D.G." and "A. BOUCHER. 5, rue du Canal. HÂVRE." on one side, and with the script initials "A. B." on the other. The instrument has two faces, one for numbers, the other (spiral) for sines and tangents. The main key turns the logarithmic scale and the smaller key large pointers on each face. Using the two pointers (one fixed) on the face shown, any interval on the scales (the outer being uniform, the inner logarithmic) may be recorded, and by the subsequent movement of the scales added to any other part of the scales.

The accuracy achieved is somewhat less than one would demand of a short (5 inch) slide rule. The trigonometrical scales are fixed, and their only advantage over tables is that they permit easy interpolation.