The teaching of mathematics to the engineering community is a subject that is very dear to my heart and something that must have been of considerable importance to the industrial nations.  Two members of the senior professional teaching fraternity made considerable contributions to the subject.  Both men invented slide rules, one of which went on to become the final extremely popular standard scale layout for engineers, the Darmstadt standard.

In Professor Dr. John Perry's outstanding book (1), The Calculus for Engineers a statement from Lord Kelvin of Largs (2) is quoted in the Foreword: "…that there is no useful mathematical weapon, which an engineer may not learn to use".  Whether Lord Kelvin actually thought of the slide rule we will never know, but Perry went on to design his slide rule.

Perry (1850 - 1920), Figure 1, was a Fellow of the Royal Society (FRS), Professor of Mathematics at the Royal College of Science in London, and an important advocate of mathematics in England.  He reformed the teaching of mathematics in the basic schools (3) and instigated a very successful series of lectures for the working man, introducing them to mathematics (4).  It is probable, but not proven, that he also mentioned the slide rule.  His greatest achievement was that he imparted the basics of mathematics to engineers at that time.  His Obituary (5) gives a wonderful quote from him: "When I am among scientific men I pose as a professional man - and when I am among professional people I pose as a scientific man - and when I find both professional and scientific people together I try and hold my tongue".  His work in imparting mathematics to engineers is emphasised in the preface by two German Professors to the German editions of his book (6)(7).  Their statement "Wir Deutsche waren eben nicht so glücklich, wie z.B. unsere Nachbarn im Westen, führende Geister zu besitzen, welche zugleich im Lager der Techniker, wie in dem der Mathematiker die Anerkennung besaßen" - "We Germans were not so lucky as, for example, our Western neighbours, to have leading spirits, being able to have the same acceptance in both the camps of the technicians as well as the mathematicians".  This applied to Perry, and he also went on to develop a slide rule layout which was named after him (System Perry) which was the subject of a patent (no 23,236 of 1901) and which was made and sold originally by Thornton (see Cajori (8)).  The design was adopted by Nestler in about 1908 who continued to sell it as the No 25 until about 1937 when it was replaced by the Darmstadt arrangement. 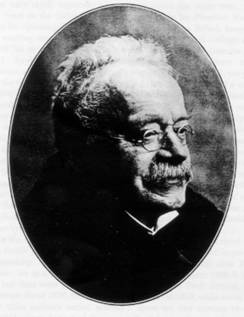 The System Perry slide rules carried the basic scale arrangement of A/B,C/D with the additional novelty for that time of a continuous LL scale on the upper and lower edge of the front of the rule.  The Thornton Perry slide rule is shown in Figure 2, (taken from an A.G. Thornton advertisement in The Handbook of the Napier Tercentenary celebrations, published in 1913.)

The Nestler version (taken from a Nestler catalogue of 1911) has a scale length of 25cm, was made from Mahogany faced with celluloid, and is shown in Figure 3.  Differences that can be seen are minor, such that one could believe that Thorton devices were made by Nestler, despite what is implied by Cajori.

Professor Dr. Walther, Figure 5, was Professor of Applied Mathematics at the Technical University in Darmstadt, Germany, from 1928 to 1966.  He was another strong champion of mathematical teaching to all - mathematicians, natural scientists but especially to engineers.  He founded the IPM (Institute for Practical Mathematics) making the link from mathematics to information technology; and he was a leading developer of computers in Germany. 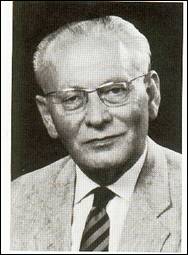 However, in 1934 slide rules were still completely relevant.  Together with his team, Prof. Walther developed the Darmstadt slide rule layout which was to become one of the most popular standards for engineers lasting until about 1950 when it was replaced by Duplex slide rules with widely expanded ranges of scales.

The Darmstadt system was a single sided design with the following layout: L,K,A/B,CI,C/D,P,S,T on the front, but the usual trigonometric scales on the reverse of the slide replaced with three log-log scales (from 1.01 to 100,000).  The unusual placement of the log-log scales on the rear of the slide rather than the more usual front of the rule caused no problems in practice, and the model became very popular.

Notes in the slide rule instruction manual referred to the authorship of Dr. Walther and his team and made his name and "Darmstadt" well known.  A comprehensive contribution to dating Faber-Castell System Darmstadt slide rules (1935 - 1976) was published some years ago (10).  The Darmstadt arrangement was adopted by European (including British) manufacturers and also by Sun-Hemmi in Japan, but not any of the American manufacturers (11).

We can see how two very important mathematicians acted very successfully in the same way, one in England at around the turn of the century (Perry) to develop a log-log slide rule, and the other some 30 years later in Germany (Walther) to develop the final and most important log-log scale layout, the Darmstadt.  Both of these men also contributed considerably to the training of engineers in that most important of topics - the "Weapons of Mathematics".

4.                    "Practical Mathematics, Summary of six lectures, delivered to working men" by Prof. John Perry at the Museum of Practical Geology, Jermin Street, February and March, 1899, with certain exercises supposed to be worked after every lecture. 1899.

5.             "Obituary Notices of Fellows deceased" By H.H.T. in the Proceedings of the Royal Society, 1,1926, piii.  "It is, fortunately, not necessary to discuss whether Perry's direct contribution to knowledge, or those which flowed from his own teaching and his influence on other teachers, are the most important.  The obituary goes on to cite: A report by The Mathematics Association titled "Teaching of Mathematics to Evening Technical Students" opens in the following words: "Mathematics has long been recognised as an important element in the education of engineering and other technical students.  Much thought has been devoted to the problem of presenting mathematical ideas in such a form that they can be assimilated and applied to technical problems.  At one time the presentation was undoubtedly too abstract.  This tendency has now disappeared, chiefly owing to the efforts of the late Prof. Perry.  His methods have been adopted very widely.  When they were first introduced, they aroused great enthusiasm, and it was hoped that henceforth no difficulty would be experienced in imparting a good working knowledge of mathematics to every student of average capacity. Subsequent experience has proved that these hopes were too sanguine.  Some very good work has been done, both by teachers and students, and yet in the opinion of many, the results obtained are somewhat disappointing".

8.             Florian Cajori - "A History of the Logarithmic Slide Rule and Allied Instruments", mentions in the preface page iii "advanced mathematicians as Segner, Perry, Mannheim, Mehmke and the great Isaac Newton".  He also lists the "Perry Slide Rule" at 1902, and "Perry's New Slide Rule" at 1908, placed on the market by A.G. Thornton.

My thanks to Peter Hopp for his help and advice.